COMMONISM – AS IN COMMON SENSE 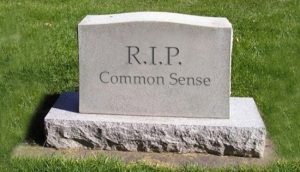 Why are there no political parties or a system which base their politics or structure on common sense as opposed to an ideology? At first glance it always strikes me as the most sensible way to go. Naive? Maybe. I’m part of a few online political groups. Most members of these groups as well as the large majority of my friends all seem inclined to belong to an –ism or -cy. There are many fancy names for these –isms and -cies. Capitalism, socialism, communism, fascism, democracy, plutocracy, oligarchy, monocracy, theocracy, anarchy and the list continues ad infinitum.

I am yet to witness any one of these –isms or –cies resulting in a ne plus ultra utopia of perfection and happiness or even closely approaching this. Perhaps it is a simpleton point of view to assume that each country or society has a myriad of different situations, which are all constantly in a state of flux. Hence no premeditated system will tackle these situations in an optimum fashion; nor will a premeditated system apply equally to all countries or societies as their situations and conditions are drastically different. So with such a simple assumption one can then say that an absolute ideology couldn’t be the most optimum way to govern a country or society. But apparently this is way too easy of an approach to look at things judging from the pure lack of any other alternatives present in the real world. (Okay anarchists and Free Worlders, I know you’ve got some alternate ideas here, but unfortunately you are so far limited to mainly online discussion groups…)

What if we had a political party that simply looked over the existing scene in that country or society and forged a political program specifically tailored to resolving the issues and problems present in that society and region, while maybe enforcing those aspects that were already positive and tackling those that weren’t?

And doing so without having to stray from their ideology and loose face or seem contradictory and all other awkwardness that stem from having to stick to an ideology in a society where that ideology (or parts of it) truly isn’t the best for that society, at least at that time and during those circumstances.

We see this all over the world right now. To my knowledge there isn’t one country which applies the communist manifesto by Karl Marx to the letter, or shall I say, even a remotely close approximation. Nope, Cuba doesn’t really either despite how popular it is among communists to state such. Take the Special Economic Zones in China for example, like Shenzhen or Guangzhou. Here you have cities or zones in a “communistic” country that are more capitalistic than Wall Street itself. An example of this can be found here: Link 1 Or take the capitalistic center of the world – the United States of America. Well, they have labor unions and the way they operate within the system is sometimes more communistic (in principle) than what is being done in mother Russia. Some examples can be found here: Link 2

Another good example is from my homeland Sweden. Sweden has traditionally been divided between left-wing parties and right-wing parties with a few smaller fringe parties. For the longest time we had 2 left-wing parties consisting of the Social democrats and moderately communistic party, though they prefer to call themselves “Left” after the word communism fell out of fashion after 1989. On the right you have 3 parties whereby one was strongly right-wing conservative with two other being more liberal and middle-ground.

Today you also have a green party which is currently towards the left side but can swing in all kinds of directions pending on which alliance it believes it can benefit from being part of. This party can be as confusing to understand as their political representatives are…

You also have the Sweden Democrats (SD) which is a fairly new party currently causing quite a bit of controversy in Sweden as one of their main political stances is to drastically reduce immigration, especially asylum seekers, and of course their origin in neonazi groups during the 80’s. The SD party is popularly referred to (by the opposition) as an right-wing extremist party. But in reality their politics has flavors from both left and right and in reality is in many aspects a conservative social-democratic nationalist party.

Sweden has for decades been one of the most lenient European countries in accepting asylum seeking people and refugees from certain areas of the world. Statistically Sweden has about 9.7 million people in total. Of these 9.7 million, 2.1 million people in Sweden are immigrants, refugees, foreign-born or first generation Swedes from non-Swedish parents. Link 3 That means that roughly 22% of the Swedish population today, March 2015, is of a non-Swedish origin.

Now, there are some full-blooded racists who are members of the Sweden Democrats (SD) but it is my belief that the roughly 13% of voters who voted for this party in September 2014 are of course not all racists. Traditionally Sweden has been one of the more liberal and anti-racist nations in the world, but the subject of racism and immigration are pretty much the daily mantra in all of Sweden’s news, blogs and political groups. The current poll shows that SD has an even larger support of the Swedish population with almost 23% of the votes in July 2015 Link 4. So how come roughly every 1 out 5 of Swedish voters support a political party which is against taking in immigrants and has some definite racist backgrounds?

I can’t purport to have the full answer but I do have a theory which is based on the exact problems I laid out in the beginning of this article. For the last 8 years Sweden has been run by a right-wing alliance. Prior to this it was run by a left-wing alliance. Since late 2014 Sweden again has a left-wing alliance. Though the left and right sides differ in many aspects, they both have been very open and liberal in regards to letting immigrants and refugees come to Sweden, especially since the right+wing alliance took over in 2006. So much so that since the 60’s millions of immigrants and refugees have come to Sweden, a country that not so long ago had about the same number of people as the city of Hong Kong in total.

Now if you have 2 million immigrants/refugees in a country of 9 million, it requires a tremendous integration system to make this all work out, and that is where the political systems, left-wing as well as right-wing have failed. I could write a book on the subject but it boils down to one basic factor – the amount of especially asylum seekers making the total number of granted residence permits in Sweden an average of about 100,000 new ones a year. To integrate this many people into a society already short of social and economic resources is like dissolving salt in a glass of water, where the water is the resources and the salt the immigrants. The water can only dissolve so much salt and the rest falls to the bottom, where many are today, collecting in immigration-dense suburbs of the larger cities of Sweden. Social conflict is unavoidable.

This situation has resulted in a growing disaffection by voters with the major political parties. So many people from both the left and the right are now supporting SD, some out of pure dissatisfaction, because SD is the only party which is in opposition to all the other ruling parties.

So why can’t the ruling left-wing alliance do something about this immigration/integration problem? Because, they have to stick to an ideology, even though that ideology (in the present circumstances) is not beneficial or constructive and many people can see it as such. Maybe that ideology was the best or at least good for a certain time and due to circumstances then.

So here we have a party which 30 years ago would have been labeled “Nazi” and rejected by the majority and with a few sympathizers having secret meetings in outback hideaways. Now they are the third, maybe even the second largest party in Sweden with roughly 16 – 23% (pending on which public opinion research group you believe) voter support.

Is it because their ideology is better? Not necessarily, but their ideology includes a solution that many people who have lost hope can think with and which is pragmatic relative to current circumstances. It deals with many of the problems people face on a daily basis and none of the other parties seem to even be able to acknowledge this despite many of the problems being clearly visible in the Swedish society.

Had there been a party which operated on common sense on the basis of what was best for Sweden considering the existing circumstances and conditions of all aspects of society, and, implemented a political program based on addressing and handling these, regardless of ideology, I bet this party would get the majority of votes and no more alliance would even be needed.

And even better, had this party/system been based on a free and open democratic way of voting where the public voted on major programs and decisions, possibly online, then a party/system that represented the people and was based on common sense would surely be the majority party rather quickly in my opinion.

But no such party exists, in Sweden or elsewhere that I know of. Isn’t it time we change how we view politics and base it on common sense and pragmatic solutions instead of some ideology dreamed up over a hundred years ago when circumstances were utterly different than now?

Looking for something specific?